Roy Bisnett, Zeeco Inc., USA, discusses how replacement burners in a hydrogen reactor feed heater saved the cost of retrofit within a week.

A large refiner on the East coast of the United States was experiencing problems meeting maximum heat release on a natural draft hydrogen reactor feed heater. Due to the refiner’s previous positive experience with burner retrofit projects, they contacted US based combustion equipment manufacturer Zeeco and asked for guidance. Zeeco burner experts completed an inspection and noted that several of the burner tips in the heater’s existing burners were plugged.

This tip plugging limited the heat release because attempting to increase the heat release under the current conditions triggered high fuel gas pressure alarms. A recommendation was made to clean the tips to allow the burners to operate at the higher end of the capacity curve, thus allowing the heater to operate at an increased heat release and improving feed rates overall for the facility. However, the refiner reported that the existing burner tips had been cleaned within the past two months and that, in fact, the refiner had to clean them nearly every month in order to operate at an acceptable feed rate. The refiner reported that tip cleaning is a time consuming task requiring a scaffold to be built, plus the manifold design of the existing burners required the removal of individual stainless steel tubing with compression fittings that fed into each individual burner tip, followed by removal of the eight burner tips for each of the six burners. The complexity and frequency of the process added a considerable maintenance cost burden to the facility as pipe-fitters and carpenters were required each time a cleaning was performed. The refiner further reported that the existing burners were an ultra low NOx design, were less than 10 years old, and operated on an average fuel gas composition of 923 Btu/SCF LHV.

Elsewhere in the refinery, Zeeco GB Single Jet burners had been retrofitted into other heaters in the plant operating on the same fuel gas supply and the refiner noted these burners did not require this rigorous maintenance due to inherent design differences. In fact, one heater had operated post-retrofit for a full six months with no tip plugging issues and another heater had just passed the one-year mark of operation post-retrofit with no tip cleaning required. Both heaters were reporting better than specified capacity and emissions.

The refinery team and burner expert team calculated the amount of lost opportunity cost in their current operation and concluded it was in excess of $10 000/day. The refiner determined that replacing the existing burners with GB Single Jet burners made operational sense, but wanted the retrofit accomplished as quickly as possible and with as little interruption to the refinery operation as possible. A CFD and burner test was not required due to empirical operation and emissions data on file from a similar application on-site. The burners had to meet emissions guarantees of 0.030 lb/MMBtu or 26 vppm while firing an average fuel gas of 923 Btu LHV, and operate to specification in a natural draft vertical cylindrical type heater with six up-fired burners. The burner circle diameter was 5.5 ft with a tube circle diameter of 15.3 ft. The radiant section height from floor to convective section measured 29.5 ft.

The GB Single Jet burners were designed to have a maximum flame height of 19.8 ft, a flame width of 2.8 ft, and 11.68 MMBtu/hr heat release for a total of 70 MMBtu/hr for the furnace. The burners needed to meet a turndown requirement of 4:1 and meet emissions guarantees of not to exceed 26 vppm, or 0.030 lb/MMBtu, while firing an average 923 Btu LHV fuel gas. The burners were to be produced and delivered within a 15-week window to meet the refinery’s desired schedule, and the team of refinery and burner manufacturer professionals developed a plan to install them while the heater remained in service. When the burners arrived, the installation team replaced one burner at a time over the course of the week without taking the furnace out of service (see Figure 1). 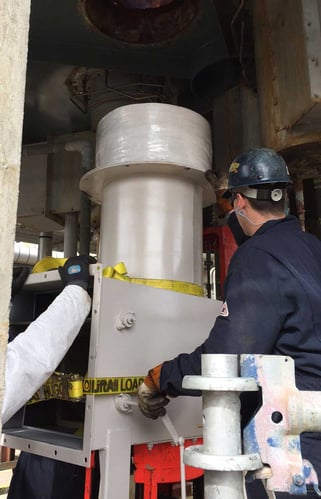 Figure 1. A new burner ready to install in the furnace during the retrofit project.

Operating characteristics of the selected burner:

The Zeeco GB Single Jet round flame burner chosen for this retrofit project uses a non-symmetrical single tip and cone design to boost internal fuel gas recirculation. The design utilises staged air and gas techniques to reduce NOx emissions (20-49 vppm for most applications) and increases opportunities for new applications and retrofits. The burner uses a single gas tip firing on a cone assembly, but instead of firing on the centreline of the burner, the tip and cone are offset to fire nearer to the inside diameter of the burner tile (see Figure 2). 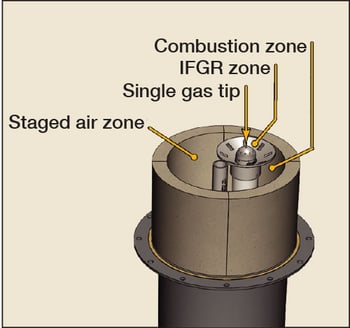 The single tip and cone is a simple, stable design. The tip drilling includes ignition ports used to ignite the burner, firing ports used to create the secondary (rich) combustion zone, and a centre staged fuel port, which enhances the secondary (rich) combustion zone. Because all ports are in close proximity, the ignition gas travels a short distance – less than 30 mm – compared to the 380 mm travel distance for many staged fuel burner designs. Since gas travels a very short distance, there is much less chance of adverse influences affecting the burner stability compared to a standard burner design.

With only one tip and cone, the burner’s compact design is often chosen for new applications and retrofits with limited space.

Because the burner has a small footprint and only one tip located in the burner throat, the gas fired from one burner is further away from the adjacent burner when compared to a conventional staged fuel burner with gas tips on the periphery of the burner tile. This design means the gas fired from burner to burner is further apart, significantly reducing the probability of flame interaction and the possibility of a ‘flame cloud’.

With a single tip and cone, there are fewer maintenance needs. The basic tip and cone design has been field proven for decades, and is the preferred design by many operations groups due to lower overall maintenance requirements.

Controlling combustion air to each burner is crucial to proper operation. The GB Single Jet uses a dual blade opposed motion damper system to control the combustion air. The damper blades are mounted on 304SS shafts to prevent rust. The damper shafts are then mounted on bearings for easy movement.

Because this burner stages a percentage of the combustion air in the burner throat and uses an offset single gas tip firing on a cone assembly instead of firing on the centreline of the burner, it is capable of generating IFGR into the base of the burner flame. The arrangement also helps create a stable low pressure zone to maximise the amount of IFGR into the combustion zone. The increased IFGR reduces the peak flame temperature in the flame core dramatically. Figure 3 shows that reducing the peak flame temperature reduces thermal NOx emissions. 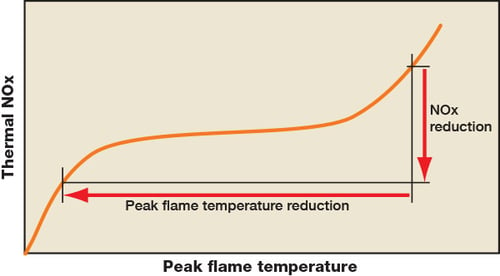 Most low and ultra low NOx burners utilise multiple gas tips, complex tile geometry, and flame holders in order to provide a stable burner flame that will meet emission requirements. With only a single gas tip and cone assembly, but with the ability to achieve more aggressive emissions requirements than traditional raw gas burners, the chosen burner fits the requirements for retrofitting into multiple furnaces. The tile geometry for the selected GB Single Jet burner is normally a straight-sided tile. In addition to being more cost effective, it is a smaller tile footprint than that typically required for a low NOx burner. This smaller tile footprint simplifies retrofit applications into existing furnace burner mountings such as this refinery retrofit project by removing the need for expensive floor steel and refractory modifications.

A lesson learned from previous burner retrofits is that some mechanical adjustability of the burner once it is installed is desirable. Most retrofits occur in furnaces that have been in continuous service for many decades. While operations personnel are diligent about maintenance, typically the external areas of the furnace receive the most attention, with the internal operating areas of the furnaces inspected and maintained during turnarounds. Many refineries are now planning turnarounds only every two to five years, reducing the opportunities to correct any damage to internal areas.

Over several decades of service, the floor refractory levels can degrade. As a result, project teams must plan for, and be able to mechanically adjust, each individual burner to the specific refractory thicknesses at each burner location. If no mechanical adjustment is provided, then it is not possible to optimise the operation of the burners to achieve the lowest designed NOx emissions. If the furnace refractory differences are too severe, it is possible that the stable operation of the burner may be affected as well.

The inclusion of mounting hubs and set screws to adjust the vertical location of the main fuel gas riser and pilot assembly is another key adjustment. The set screws and mounting hub mitigate the effects of uneven areas of floor refractory or heater floors warped from decades of service. With this adjustment capacity, the installation team can accurately set the location of the cone assembly, main fuel gas tip, and pilot location for optimum burner operation and reduced NOx emissions.

Finally, the typical GB Single Jet burner design includes a small burner fuel gas riser and pilot mounting plate with slotted holes on the burner front plate. This allows for the main firing mechanism of the burner to be adjusted in the horizontal direction without changing the firing geometry between the main fuel gas riser, cone assembly and the pilot location.

The refinery’s projected ROI for this project was based on both the reduced cost of maintenance versus existing burners and the anticipated recovery of heat release capacity and feed rates. The chosen burner design uses a single gas riser assembly with gas tip, a design proven over long service in numerous refineries and installations. Removal of the fuel gas riser, when necessary, is easily accomplished by unfastening four mounting nuts and removing the fuel gas riser from the burner. With a single, easily removable fuel gas riser and gas tip, the refinery anticipated far lower maintenance costs and cleaning down time.

One immediate result of the burner retrofit was the furnace began operating at a significantly lower fuel gas pressure of 18 psig and required only five of the six burners to achieve the desired heat release at that pressure. The new operating pressure was well below the maximum 27.5 psig and the burners operated as expected with stable flames and low flame interaction (see Figure 4). With those operating parameters, the new burners paid for themselves in less than one week of operation. 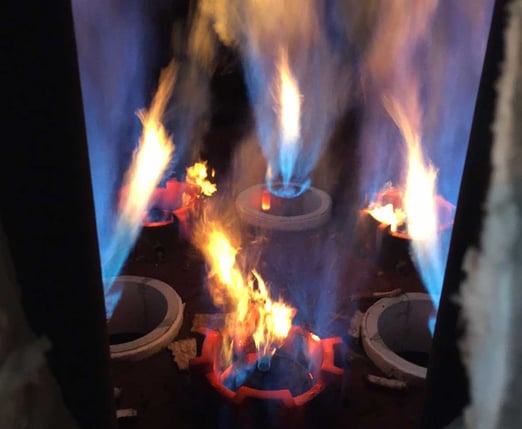 At the six-month post-retrofit mark, the refinery reports the burners continue to operate at 18 psig with only five of the six burners required to be in operation to meet heat release and feed rate goals. No cleaning had been required to date. Following the six-month evaluation, the refinery chose to retrofit an additional four heaters with GB Single Jet burners. All have performed well in the field with minimal maintenance. All of the retrofitted furnaces continue to operate below emissions guarantees of 0.030 lb/MMBtu or 26 vppm on average 923 Btu LHV fuel gas. Stack testing was performed and recorded by an independent party and performance was well below predicted NOx emissions (see Table 1).

Roy Bisnett has served as End-User Support for Zeeco Inc since 2015. He works to find solutions for refining and petrochemical facilities across the Eastern US and Canada for all manner of combustion-related issues. He spent more than a decade on the end user side of petroleum refining before joining Zeeco, and is a graduate of numerous industry-specific training and certification programmes.