Rising fuel costs, new regulations requiring carbon footprint reductions, and global net zero carbon initiatives continue to pressure the refining and chemical industry markets. The two main methods to reduce CO and CO2 emissions are to either capture and sequester the carbon in the fuel gas or to remove carbon from the fuel before firing.

Many organizations are considering refueling existing fired equipment with sustainable, low-carbon fuels. One such fuel is hydrogen (H2 ), which can be produced through renewable energy sources (green hydrogen) or by reforming natural gas (blue hydrogen). Removing carbon before combustion eliminates the need for costly equipment to capture and sequester the carbon during firing.

Whether produced through green or blue sources or recovered from existing plant processes, H2 can be injected into existing fuel gas networks to produce high hydrogen blends or used in pure form for fueling fired heaters and process furnaces. As H2 displaces hydrocarbons in the fuel composition, the number of carbon atoms decreases. A fuel stream composed of 100% H2 cannot generate CO or CO2 as a by-product of combustion due to the lack of carbon in the combustion reaction. Therefore, the higher the H2 content of a fuel, the lower the overall CO and CO2 emissions.

Due to the vastly different combustion characteristics of hydrogen compared with conventional hydrocarbon fuel gases, there are several challenges that need to be considered by plant owners and operators when transitioning to firing hydrogen.

Most fired heaters and process furnaces that exist today were designed for firing natural gas or refinery fuel gases that contain a high proportion of saturated hydrocarbons with a make-up of hydrogen, inert gases, and traces of other compounds. Typical hydrogen content for refinery fuel gas may vary between 20 and 40% by volume. For hydrogen refueling, H2 concentrations of 90 to 100% are probable. This quantity of hydrogen changes the operating parameters of the burner, so special attention must be paid to the burner design to ensure heater operation is not detrimentally affected. Firstly, the laminar flame speed of hydrogen is significantly higher than hydrocarbon fuels, promoting a more rapid combustion process and increased heat release per unit volume. Combining that fact with higher adiabatic peak flame temperatures leads to elevated temperatures local to the flame, which directly increases NOX emission rates by up to a factor of three. Employing ultra-low-NOX burner technologies can help to remain within legislative NOX emission requirements when firing high H2 fuel. 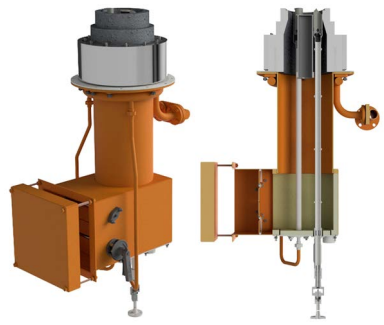 For example, the flame speed in H2 combustion is approximately 5.7 ft./sec., while the flame speed of natural gas is significantly slower at only 1.3 ft/sec. H2 firing has a higher stoichiometric adiabatic flame temperature of 3960°F, while natural gas has an adiabatic flame temperature of 3518°F.1 These significant differences in combustion characteristics require engineers to evaluate the materials used in burner construction and the type of burner used. Typical burner construction includes various metal components and a refractory throat or tile. The increased flame temperature of H2 requires upgrading the steel used for nozzle construction, throat construction, and flame stabilizers to a higher grade stainless or alloy. Refractory used within the burner should be carefully evaluated and its composition modified to withstand the elevated temperatures characteristic of H2 firing. The steel used in burners firing H2 should not be susceptible to hydrogen embrittlement and high-temperature hydrogen attack. Both phenomena can prematurely degrade an improperly chosen steel, leading to early failure of the burner parts. Increasing hydrogen content in the fuel gas lowers the specific gravity of the fuel, causing the fuel gas mass flow rate to decrease. Consequently, it is often necessary to increase the fuel gas pressure to achieve the same burner heat release. Therefore, burner gas tip design and fuel gas piping hydraulics should be assessed and re-sized as necessary. Additionally, existing heater safety interlocks and trip settings need to be reviewed and amended as appropriate for high hydrogen fuel. For example, furnace TDL systems and flame scanners with UV/IR detection may no longer be suitable and alternative technologies capable of detecting high hydrogen flames may need to be considered. These aspects are covered through heater impact studies.

The ZEECO ultra-low-NOX FREE JET burner utilizes internal flue gas recirculation for reconditioning of the fuel gas with inert products of combustion prior to mixing with combustion air. The reconditioned fuel mixture prolongs the combustion reaction, thus reducing peak flame temperature and thermal NOX production. This burner can achieve NOX emissions of less than 50 mg/Nm3 on 90% hydrogen fuel without steam injection or post-combustion emissions control. The principle relies on the conversion of momentum of fuel gas ejected from the tips to entrain flue gas. To achieve this, discrete high-velocity jets of gas are injected through a ring of gas tips on the outside of the tile. The gas jets help to counteract the high flame speed of hydrogen flames, ensuring a stable and robust flame over a wide operating range. Another consideration when firing high hydrogen fuel gas is using a burner with low mass gas tips. In the FREE JET burner example, the gas tips protrude through the furnace floor by approximately 25 mm, so the thermal intensity over the gas tip profile is significantly reduced. This means the gas tips are suitably designed to withstand the elevated temperatures characteristic of hydrogen firing with an extended operating life.

Pre-mixed radiant wall burners, as commonly used in ethylene cracking furnaces, present an altogether different challenge when firing high hydrogen fuels due to the propensity for flashback. Because of this, burner designers must consider the flammability window and flame speed of each specific fuel composition. The flammability window of pure methane is between 5% and 17%, with a flame speed of 1.3 ft/sec. This means that when mixed with air at a concentration between 5% and 17%, methane will support combustion at that speed. The flammability window for hydrogen is between 4% and 74%, with a flame speed of 5.7 ft/sec. As the industry pushes hydrogen concentration higher, it becomes increasingly difficult to design burners with exit velocities that can overcome this increase in flame speed, especially considering a common requirement for the burner to operate on both a natural gas and high hydrogen blended fuel. If the designer gets this balance wrong, the flame will propagate back inside the burner. Known as flashback, this can be detrimental to the mechanical integrity of the burner components and thermal NOX emissions levels. To overcome this technical challenge, Zeeco has developed a radiant wall burner design capable of firing fuel gas combinations of more than 90% hydrogen whilst producing less than 100 mg/Nm3 NOX emissions levels. This burner design utilizes a proprietary fuel staging design that produces two separate mixture zones exiting the tip. This combination allows the burner to generate the exit velocity needed in the lean zone to prevent flashback while delaying combustion in the rich zone long enough to mix fuel with inert flue gas products.

This burner can be retrofitted in existing ethylene furnaces for firing high H2 fuels even in challenging furnace applications with extremely tight burner-to-burner and burner-to-tube spacing, still meeting the <100 mg/Nm3 emissions requirement.

Conventional flame scanners are configured to detect combustion radiation in the UV, visible, and IR spectrum. The exact spectral ranges are based on the wavelengths characteristic of the combustion of hydrocarbon fuels. The UV and IR components vary depending on the specific type of fuel used; therefore, conventional scanners have wide spectral ranges, allowing operation on various gaseous and liquid fuels. When firing high hydrogen fuels, the absence of carbon means that the spectral range of radiation produced by the combustion process is significantly narrowed and shifted more toward the UV spectrum. Therefore, scanners that rely on UV and IR spectral ranges experience weakened peak flame signals, leading to nuisance trips. For scanners utilizing the UV spectral range only for flame detection (no IR component), peak response occurs at the OH-radical remission wavelength. Therefore, the absence of carbon in the flame does not impede the scanner’s ability to detect radiation from the target burner. One example is Zeeco’s ProFlame scanners, which can reliably detect 100% hydrogen flames, a critical furnace safety interlock when firing high hydrogen fuel. The burner flame may become much shorter when firing high hydrogen fuels due to increased flame speed. Therefore, it is essential to sight the flame scanner properly to ensure it is aligned with the target flame. This will reduce the chance of unwanted background signals being detected by the flame scanner.

Most pilots used on fired heaters are the self-aspirated type, meaning the air is naturally induced for mixing with fuel gas prior to combustion. When using high hydrogen pilots, the chance of flashback inside the pilot tube increases. It is crucial to employ pilot designs capable of firing on pilot gas compositions of up to 90% hydrogen without flashback to avoid damage to the pilot itself and any internal components. For example, some pilot designs utilize an adjustable air door to manually control airflow and prevent flashback when firing high hydrogen fuels. As the hydrogen content increases, the air door must be closed further to maintain the jet speed and prevent flashback.

Many burner pilots used on fired heaters are equipped with ionization rods for pilot flame detection. Flame rods work through the ionization/rectification process to complete an electrical circuit. When the flame rod is energized, the current produces a positive charge that attracts negative ions in the flame. The positive ions produced in the combustion process are attracted to the grounding area of the pilot tip. By attracting more positive ions to the ground, the flow of electrons is rectified and flows in one direction. This produces a direct current signal that indicates the presence of flame. For the ionization system to function properly, a significant number of ions must be present in the flame. Hydrogen flames produce few ions compared with organic compounds, so a weak current is generated that cannot be detected by the flame ionization module. Therefore, flame rods are not a suitable method of pilot flame detection for high hydrogen fuels, and alternative means of pilot flame detection must be considered. One method of pilot flame detection is the use of a flame scanner that is mounted to the rear end of the pilot. The flame scanner is sighted on the pilot tip for detection of the flame. The pilot tip shield can be specially modified, so the flame scanner does not detect a signal from the main burner flame.