Developed in the 1970’s, Multi-Point Ground Flares (MPGF) derive their name from their physical layout. Instead of the flare flame being on an elevated structure, the flame is spread out in a grade mounted field of multiple pressure assisted flare tips. The tips are then arranged in stages that open as the upstream pressure and gas flow increases and close as pressure and flow decreases.

MPGF are often selected for heavy hydrocarbon service with high available pressure; however, they can be used for a wide range of gas compositions. High pressure assists in obtaining full smokeless operation, which can be difficult to do with other assist mediums. Each tip in a MPGF has unobstructed air access, allowing the momentum from the high exit velocity of the flare gas to entrain the necessary air for full combustion. MPGF are designed to provide maximum smokeless performance, while minimizing radiation impacts and the need for a large sterile area around the flare. Installing a fence around the field can block the visibility of the flare flame, serving a dual purpose of reducing radiation and the likelihood that flaring operations will be a nuisance to the public. Figure 1 is an example of a typical MPGF installation.

With increasing demand for Multi-Point Ground Flares both domestically and internationally, noise generation from these flares have become a focal point of discussion. Currently, there are no set industry standards for noise predictions and theoretical noise values, which often vary between flare suppliers.

Over the years, Zeeco has conducted numerous noise measurement tests on Multi-Point Ground Flares. This paper will cover the testing and test results obtained in conjunction with one of the foremost noise consultants in the industry. In addition, this paper will address in detail noise generation from various gases at multiple sonic and sub-sonic flow rates. Further information and analysis will be provided to discuss the impact of jet noise vs. combustion noise, as well as calculating noise at various distances.

Zeeco hopes to set standards within the combustion industry in regards to predicting noise for Multi-Point Ground Flares based on the relationships correlated from the test data. 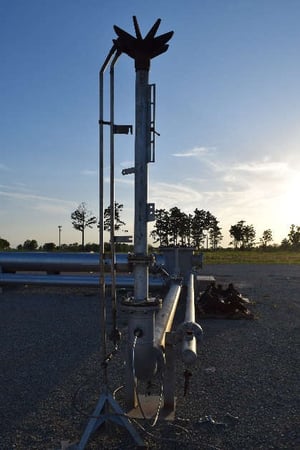 Noise measurements were recorded at distances of 100’-0” and 200’-0” to the East of the flare tip using two Norsonics NOR140 Type I noise meters. One meter was placed at each distance to measure simultaneously during the test points. Each measurement point lasted 60 seconds.

In order to minimize the amount of background noise, testing was conducted at night with all non-essential equipment (compressors, forklifts, etc.) shut off to avoid contamination of the noise results.

To aide in the testing, Zeeco partnered with Hoover & Keith, a well renowned noise consultant located in Houston, Texas. A consultant from Hoover & Keith was present during all testing and was involved in data analysis.

With the observance of increasing acoustical efficiencies associated with increasing fuel flow rate for a constant exit area, further testing is required to determine actual causation. Testing of the same format with a multitude of fuel gases would be beneficial. This information would provide more evidence to analyze trends present between fuel gases with different heating values and molecular weights. In addition, fuel blends and inert mixtures would add additional understandings to the phenomena observed. The aforementioned acoustical efficiency testing could potentially yield a more accurate method of predicting multipoint ground flare noise levels.

While the combustion versus venting tests provide insight into which frequency ranges are dominated by respective noise mechanisms, it would be beneficial to test a multitude of fuel gases of differing molecular weights and sonic velocities. Adjusting fuel exit areas while maintaining a constant fuel flow rate would yield a better understanding of the driving noise mechanisms of combustion versus venting and would allow a better understanding of the magnitude of impact from combustion noise. This would be facilitated by incrementally decreasing the fuel exit velocity and respective jet noise, while maintaining constant combustion.